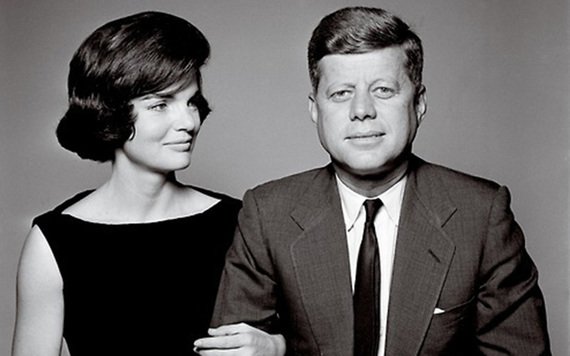 It took a mutual friend three years to finally introduce John Fitzgerald Kennedy, a handsome and popular young congressman from Boston’s blue-collar Eleventh District, to Jacqueline Bouvier, an aristocratic and stylish beauty working for a Washington newspaper. Charles Bartlett didn’t realize he was creating a twosome so magical that as America’s President and First Lady they would lead a White House era likened to Camelot and captivate the country for generations.

Jackie ‘always had these sort of English beaux, and I must say they were not up to her,’ recalled Bartlett, then Washington correspondent for the Chattanooga Timer. Jack, meanwhile, six feet tall with thick brown hair that was always falling over one eyebrow, had a well-earned reputation as a ladies’ man and was often photographed on the nightclub rounds with one glamour girl or another on his arm.

The match clearly had potential. Like Jack, Jackie was from a wealthy Catholic family, and was someone his powerful clan would surely welcome. Indeed, with his famous Massachusetts name, money (his father, Joseph P. Kennedy, had endowed each of his children with one million dollars when they reached voting age) and good looks, Jack was considered by many to be the most eligible bachelor in the country. Never mind Jack’s political future – during his campaign for the U.S. Senate, the Saturday Evening Port reported that ‘every women wanted either to mother him or marry him.’ By then, Jackie had fallen into the latter category.

Bartlett’s first attempt to acquaint the two, in 1948, at his brother’s wedding in Long Island, was a flop. He tried to engineer Jackie across a crowded room to meet Jack, but at about the halfway point, he introduced her to the boxer Gene Tunney, with whom she began a conversation. By the time he got her to the other side of the room- Tack had already left.

Though the fix-up was ‘always in his mind,’ Bartlett didn’t succeed until he and his wife, Martha, gave a small dinner party at their Georgetown home in the spring of 1951. By that time, Jackie had spent a year at the Sorbonne in Paris and was enrolled at George Washington University in Washington, D.C. During her short time in the capital she had also been briefly engaged to stockbroker John Husted.

Not surprisingly, the future president was attracted to his dinner companion. ‘I leaned across the asparagus and asked for a date,’ he recounted. After dinner, Bartlett remembered walking her to her car and Jack chasing after her. ‘He was muttering shyly about, `Shall we go someplace and have a drink?’ ‘ recalled Bartlett. Somehow, a friend of hers had been waiting for her in her car. She had to pass on the drink.

‘It was a very spasmodic courtship,’ Jackie said. ‘We didn’t see each other for six months, because I went to Europe again and Jack began his summer and fall campaigning in Massachusetts. Then came six months when we were both back. Jack was in Congress, and I was in my last year of George Washington University. But it was still spasmodic because he spent half of each week in Massachusetts.’

By now Jack was deep into his campaign. In December of 1952, Martha Bartlett decided to intervene. She needed an extra male guest for a dinner party she was giving, and she told Jackie, now the ‘Inquiring Photographer’ for the Washington Timer-Herald, to invite Jack.

During the weeks that followed, the two went to the movies together -Jack particularly enjoyed Westerns and movies about the Civil War – and they discussed the history books he gave her, including Marquis James’ The Raven and John Buchan’s Pilgrimï¿½r Way. In return, Jackie gave him two books of her own drawings. There was at least one subject they didn’t discuss. ‘We hardly every talked politics,’ said Jackie.

Jack asked her to accompany him to President Dwight Eisenhower’s inaugural ball the following month. In May, Jackie was on assignment in London and preparing to photograph the coronation of Queen Elizabeth II. Contrary to many accounts, Jack didn’t propose while Jackie was overseas by either telephone or telegram. The telegram that he did send her, however, was a declaration of sorts: ‘Articles excellent but you are missed.’ Indeed, when she returned, he asked for her hand in marriage. To seal the betrothal, Jackie received a square-cut diamond-and-emerald ring from Van Cleef & Arpels. They waited until June 25 to announce their engagement, supposedly to avoid contradicting a just-published Saturday Evening Port profile entitled ‘Jack Kennedy – The Senate’s Gay Young Bachelor.’

The coronation of Queen Elizabeth in Great Britain was a suitable preamble to the thirty-six-year-old senator’s storybook wedding on September 12, 1953, less than a decade before he was elected the thirty-fifth president of the United States. The wedding was considered the most impressive social gathering that the denizens of Newport, Rhode Island, had witnessed in thirty years, the details of which were breathlessly covered by Life magazine.

Archbishop Richard Cushing of Boston performed the rites and read a special blessing from Pope Pius XII at St. Mary’s Roman Catholic Church while some five hundred fifty guests, including diplomats and senators (the entire Senate was invited), looked on. Jackie, twenty-four, wore a demure pearl choker, her grandmother’s lace veil, a tiara of orange blossoms and a gown stitched from fifty yards of cream faille. Holding fast to bridal tradition of wearing something borrowed and something blue, she clutched her mother’s lace handkerchief and wore a blue garter. Jack wore a morning suit. His brother, Robert, was his best man. Jackie’s sister, Lee Bouvier Canfield, was matron of honor. At the last minute, her father, Jack Bouvier, reportedly fell ill, and her stepfather, Hugh D. Auchincloss, escorted her down the aisle.

Twelve hundred guests attended a reception at Hammersmith Farm, the threehundred-acre estate on Narragansett Bay belonging to Jackie’s stepfather and her mother, Janet. The newlyweds spent nearly two hours greeting guests before everyone sat down to their fruit cups under a massive striped tent erected on the lawn. The fifteen-piece Meyer Davis Society Band played. The couple spent the night at the Waldorf-Astoria in Manhattan and then honeymooned in Acapulco before checking into a hillside suite at San Ysidro Ranch in Montecito, California. After Jackie suffered a miscarriage and a still-born birth, their daughter, Caroline, was born four years later, November 27, 1957, followed by sons, John, Jr., born November 25, i96o, and Patrick who was born in 1963 during his father’s presidency but lived only 39 hours. The child was the first baby born to an incumbent U.S. president since 1895.